“Trust and Transparency are Essential for the Success of Your Business” ―Professor M.S.Rao 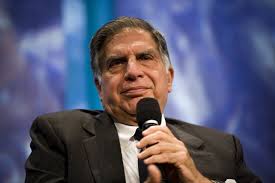 “No ruler can establish himself without trust from the people.” ―Confucius

When you look at the collapse of global companies such as Enron, Leyman Brothers, Tyco and other companies, it is obvious that there is a steep decline in ethical values.  People are losing trust on leaders gradually.  Opinion polls blame that the challenge is acute and it is tough to reverse the trend to build trust.  Some people blame business schools.  Hence, let us discuss about trust and transparency to achieve organizational excellence and effectiveness in this post.

There are several elements of trust such as competence, commitment, communication, credibility, reliability and integrity. When leaders combine these elements and walk their talk, they can build trust in various stakeholders.

When leaders cut corners, they lose trust in the stakeholders. When leaders are selfish and gain at the cost of others, they lose trust. When leaders emphasize on ends rather than on means, they lost trust. There are leaders who were beset with scandals and finally hit their rock bottom. However, there are a few leaders who realized their mistakes and worked hard, won trust and confidence from others. For instance, Jimmy Carter left the presidency after one term with a somewhat tainted image. The economy was in a shambles, rescue efforts for kidnapped hostages had failed, and confidence in his judgment was very low. However, over subsequent years, with dedicated work through Habitat for Humanity, peacemaking, and service, he was able to resuscitate his image and create a new brand as a Good Samaritan, peacemaker, and diplomat. In another shift, Bill Gates founded Microsoft and became known for his aggressiveness and business competitiveness. But when he donated a great deal of his personal fortune and his time to philanthropy, he began to change his cutthroat image to one of concern and compassion.  However, they are exceptional cases. Here is a story of Mark who struggled hard to rebuild trust in lenders.

A Short Story on Rebuilding Trust

Mark did a wholesale trading business and was bankrupt as some of his customers took goods on credit from him and did not pay him the money. He filed cases in court but ineffective.  Lenders began chasing him as he took loans from others. Unable to bear the pressure from his lenders, he absconded with his family to unknown location for safety. After a few years, he visited the previous place of his business to settle the debts.  He still had to pay the debts to some of the lenders. Mark informed them that he would come back next time and pay the remaining debts. But the lenders did not trust as he absconded once. With the help of guarantors he came back to the place of his existing business, raised a few loans and paid back the money to the rest of the lenders.  He stood by his commitment and proved that he would not make the same mistake again.  Takeaway from this story is once trust is broken it is tough to build it. Hence, everyone must ensure that they honor their commitment to build trust in others.

Leaders are always under scanner. People often look at negative aspects rather than positive aspects. Hence, leaders must be careful in their personal and professional lives. It is easy to fall from the top of the tree but it is very tough to climb the tree. Similarly, it is easy to earn bad name but it is very tough to earn good name.  Warren Buffett once said: “It takes 20 years to build a reputation and 5 minutes to ruin it. If you think about that, you’ll do thing differently.”

Trust and transparency are essential to success of businesses. Hence, always emphasize on values and principles to accomplish your goals. Remember, we carry either good or bad reputation after our death. Why shouldn’t we carry good reputation to leave a mark behind for others to follow?

“To be trusted is a greater compliment than to be loved.” —George MacDonald

Note: It is based on my upcoming authored book tentatively titled, 21 Success Sutras for CEOs: How Global CEOs Overcome Leadership Challenges in Turbulent Times to Build Good to Great Organizations.

Kindly share your thoughts and comments below, I’m sure someone out there will find your story useful.

Copyright©2015 MSR Leadership Consultants India. All Rights Reserved. Reproduction in whole or in part without permission is prohibited.

This is a nonprofit blog to share Professor M.S.Rao’s passion and vision to build one million students as global leaders by 2030. Please don't cut articles from my blog and redistribute by email or post to the web. The use of this material is free provided copyright is acknowledged and reference or link is made to the Blog http://professormsraovision2030.blogspot.in.  This material may not be sold, or published in any form, or used in the provision of business services to a third party without permission. 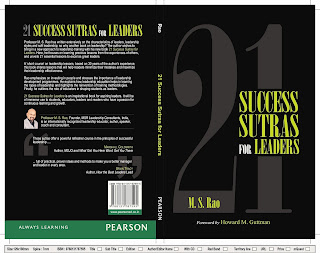 Here is the sample chapter of my award-winning book ‘21 Success Sutras for Leaders’ ranked as one of the  Top 10 Leadership Books of the Year for 2013 (San Diego University) Here is the link to purchase this book: Amazon URL: http://www.amazon.com/21-Success-Sutras-Leaders-ebook/dp/B00AK98ELI

Leadership is a Responsibility, not a Badge of Honour

Leadership is neither a rank nor a title. Leadership is a position with responsibility. It is not a position to be appointed by others. It is the people who give such position to deserving leaders. Thom (1996), in developing his 14 guides for successful leadership, includes concepts like ‘charismatic’, ‘visionary’, ‘driven’, ‘inspirational’, ‘coach’ and ‘cheerleader’ in an effort to describe a leader. He goes on to note, ‘Leadership is not a brass ring you can grab. It is a gift presented to you by your employees after you have proven yourself worthy of having it’ (ibid.: 14–16). Hence, leaders cannot claim that position, but people will give that position to the deserving ones.

Leadership is not by chance, but a choice. Leaders undertake their responsibilities voluntarily; leadership is not thrust upon them in this civilized world unlike in ancient times, when heirs were thrust upon. Whenever there is a crisis, the real leaders emerge to smoothen the situation, and whenever a ship sails into a storm, the real captains emerge to steer the ship successfully to shore. Therefore, leadership is less about position and more about disposition. Leadership is all about making things happen, walking the talk, achieving the objectives and, above all, making a difference in the lives of others.

Many people think that leadership is a badge of honour. In fact, it is a responsibility, where leaders undertake actions and keep pushing things forward. True leaders do not pass the buck, but take responsibility and move forward. They influence people, build teams, motivate them, and ultimately achieve the desired objectives. People often think that everybody can become a leader easily. However, the path is riddled with many challenges. Even if a minor mistake is made, people will not forgive their leaders. Warren Buffett once remarked, ‘It takes 20 years to build a reputation and five minutes to ruin it. If you think about that, you’ll do things differently.’ While taking responsibility, leaders are very aware of the consequences of decision-making, and know that every decision will not go well. They have to accept moral responsibility for decisions that go wrong, and have to spread fame when group members do things well. Hence, there are several challenges involved in taking responsibility.

Some leaders are overly conscious of their leadership titles, such as Dean, CEO, Senior Manager, Managing Director, and so on. Leadership is a behavior that anyone can demonstrate at any time, without recourse to any organizational or hierarchical position or title. In fact, we are all leaders in some journey of our lives, where we rise to the occasion and demonstrate our hidden talents and potential. Leadership does not go by rank, position or title. Leadership is not the privilege of a few individuals, as many people think.

Although M. K. Gandhi was referred to as Mahatma (super soul), he disliked being called Mahatma Gandhi. For Mahatma Gandhi, the title was not important; freedom for India was more important. He moved with the masses, associated with them, and served them like an ordinary man. Hence, top leaders do not believe in titles or positions, but they emphatically believe in undertaking responsibilities and doing their jobs successfully.

Stephen R. Covey, in his book The 8th Habit: From Effectiveness to Greatness, emphasizes that leadership is not a position but a ‘proactive intention to affirm the work and potential of those around us ...’. It is clear that leadership involves affirming faith in the work of your group members and enhancing their potential. Robin Sharma, in his book The Leader Who Had No Title: A Modern Fable on Real Success in Business and in Life, substantiates the same. Several leadership gurus have clearly asserted that leadership is not a title or a position, but is all about taking responsibility. Robin Sharma also says, ‘In this materialistic world, we chase titles, fast cars, and big bank accounts in a search for greatness when, in truth, all that we really want we already have. The excellence and the happiness we crave are inside of us.’

Robin Sharma says, ‘You are a leader, no matter what you do in your life either with title or without a title, you are still a leader.’ He further adds,
You need to have passion to do any job. It is not the title that gives you respect but the amount of contribution you make to your work. Title gives you only authority. But the real leadership involves walking the talk and leading from front regardless of the area of activity to pursue.

One thing that people must remember is that nothing is permanent. No titles are permanent, and we have to depart this world leaving everything behind, and with either a good or a bad reputation. Hence, people must learn to live life happily by helping others, and making a difference in the lives of others without craving for so-called titles, positions or badges.

How to Prepare for the Post-COVID-19 World? 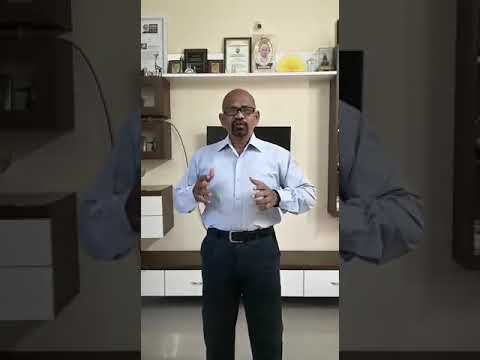